Ken began coaching with us in 2014.  As one of our valuable head coaches he has added Coach Manager to is already impressive skills! Seen retiring from teaching 2017 to pursue other ventures, going into business with his son, coaching school teams again, and now teaching for a time: he is busier than ever. LOL As a teacher Ken accumulated an extensive coaching background and experience with many schools’ athletic teams in various sports.  He passes on his passion in his coaching by enriching and developing athletes in all areas of the game including technical skill, game IQ (strategy), behavior and knowledge. Under his leadership teams have achieved many medals including 2 in 2015 and a gold medal in the 2016 VA Premier 2 tournament. He is a definite asset to our coaching team, and we are thrilled to welcome him back!

Brenda has 2 diploma's from Mount Royal College in Aquatic Administration and Recreation Therapy adding a third as an EMT-A in 1997.  She managed seasonal swimming pools and worked as an EMR/EMT-A in Forestburg and Fairveiw.  Brenda started her coaching career at the age of 16. Coaching and teaching swimming, spring board diving and baseball with a Fully Certificated Level 1 Coach, for 16 plus years.  Adding the NCCP Advanced Development Certificate in volleyball in 2015. She enjoys developing and mentoring new coaches. She is excellent at teaching basic skills and technique.  She will give young athletes' a great start to enjoying and playing well in the sport of volleyball. 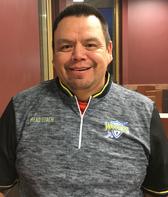 Peter grew up in foster homes and went through some rough teen rebellion but thanks to some great role models on the way he made his life a success as he graduated from high school at 16 years of age and Nanaimo College at 19 with a Degree in Aboriginal Youth Support Services.  He opened a dance club in B.C. which still runs today.  Peter played many sports in junior and senior high and continued through college.  He has coached football and soccer for 10 plus years and was a trainer with the Edmonton Drillers Soccer League. Peter believes that all youth should be encouraged to play a sport as this motivates kids to keep safe, be positive and stay active.  We are thrilled to have Peter help us grow our Recreation League through its infancy.  Welcome to our team Peter!

Emma is a former Warrior athlete and is now coaching for us. In 2021, her first year as coach, she took her Namao school Jr Girls team to an undefeated season!  She started playing volleyball when she was 12yrs old and today has excellent knowledge, strategy skills and is ready to share this with our athletes.  She is currently completing her Development Coach Certificate and shows an awesome coachability attitude and is a pleasure to be around. Her enthusiasm and upbeat character will bring excitement and willingness to learn to our young female athletes.  She holds a certificate as a Personal Training and currently works for the government of Canada.  We can't wait to watch her continue to develop her training portfolio and grow with us.  Welcome to our team Emma!

Caitlann is an alumni Athlete with the Warriors playing for us from the age of 14. She is a very strong voice for our team’s moral, spirit and passion! She comes with tons of energy, skill and knowledge. As an assistant coach I can’t wait to see her shine as she lights sparks of greatness under her team! Welcome Caitlann to our team of coaches!

Gregg grew up in Edmonton and moved to this area 15 years ago to serve Parkland and Lac Ste Anne areas as a business owner.  With a sovereign heart he donates to the children Stollery on a continuous basis.  After playing sports right from the beginning, with 22 years in football and hockey, Greg turned his efforts to coaching.  He comes to us with 16 years of coaching experience in various sports including junior AAA level hockey, football, baseball, soccer, and volleyball.  He and his 2 daughters enjoy their annual trips to Mexico or Hawaii with lots of camping in between. We are very excited for Gregg to continue his coaching career with us!

Naomi is an alumni athlete with us. She was a competitive, middle position, athlete on our U14,15, and 18 teams. She also played all through JV at her school - St. Peters the Apostle. During high school Naomi assistant coaching the grade 9 senior girls. She is currently working at as an HCA and studying at Norquest College for LPN. We are trilled she has decided to continue with the Warriors joining our coaching team and look forward to see what the future has for her! Welcome Coach Naomi!

Shawn moved to Alberta from Nova Scotia in 2014 after his retirement from the Canadian Armed Forces. He played competitive volleyball for 10 years until injury forced him to retire in 1998.  This, however, was conquered by starting his coaching career in various sports while spending time with his two, now grown, daughters. He is a proud Pappy and looking forward to coaching is granddaughter when she's older! He has been coaching for over 15 years with the last 6 as volleyball specific. Shawn continues to keep educated and active. He is currently in the process of completing his Developmental Coaching Certification.  He has a passion for volleyball, and absolutely loves mentoring and developing young athletes.  One part of Shawn’s coaching philosophy is to focus on the positive to build confident athletes! We are very excited to have him and look forward to watching him in action. Please join us in welcoming Shawn to our team!

Welcome back Kassidy as Assistant Coach with our U17/18 Women’s team.  As an alumni Warriors Setter (2014-2016) she carries on her passion and knowledge to her team. She has completed University.  We are thrilled that she is continuing with our team of coaches.  Kassidy continues to commit herself as an excellent role model for our young lady athlete’s!  Can’t wait until she is ready and wanting her own team! Welcome back Kassidy!

Dia is the Founder of Girls in Sport, Alberta. Dia joined our team in 2013 as our U15 Girls Coach. She has lead her teams to 2 medals including a gold at the 2016 VA #2 Premier Tournament. Dia began her Volleyball career in 2006 playing on Junior and Senior High School teams. Even after moving to Windsor, Ontario in 2010 volleyball continued to be an important part of her recreational life. Launching herself into a coaching status her goals with the sport evolved. She is an Advance Developmental Coach but took her coaching career to a whole new level after being awarded the "Take the Lead Grant" sponsored by InMotion Network (funding provided by the Alberta Sport Connection). She is working towards her Advanced Coaching Diploma which is the pinnacle of a coaches’ NCCP education and is recognized as being among the most qualified coaches and leaders of athletes and sport programs provincially, nationally and internationally.  We are privileged to have Dia's drive, heart, commitment and determination as she strives towards her future goal as a certified Performance Coach.

WANT TO
GET IN THE GAME?

Tell your Team Manager to turn
RAMP Team on!

Do you want to reach thousands of users across hundreds of Minor Sports Association websites? Advertising with RAMP has never been easier! Get in touch with us now to discuss your needs.